Just Running Around… Running longer and faster… a few thoughts…

Multiple day post… Lots to do this week really!

Wednesday:
Full day east, only eccentric heel raise done. Heel felt ok although a bit tired. No stress for training, just rest (well, lots to do at work and at home, but nothing on running…)

Thursday:
Decided for an early morning run. Not that I felt really for it when the clock rang at 4:50am though… Did not warm up the heel before the run so it was feeling a little but at first . Had decided an easy 10K, but after 4 km it felt nice and I planned to extend it to 12K… Turning right on the road at a crossing point, I quickly calculated it would make the run close to 15K. By the time I reached home, had completed 16K… Felt really nice of course afterwards and had a nice day at work as well. But got really tired in the evening, so headed to my pillow around 8 pm already… Must have slept shortly after!

Quite dark skies still when starting the run 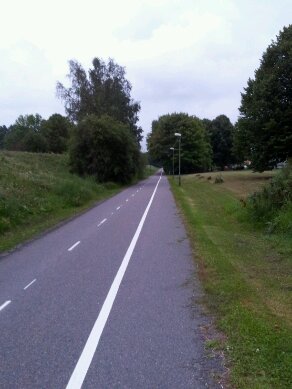 Newly painted bike road...have to run on the right side now...

Slope not to difficult but not easy either 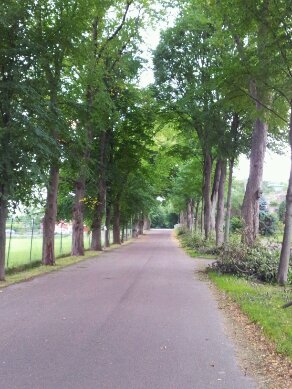 Sun going up behind the bridge...

Friday:
Planned rest day, but after a morning of non-stop meetings, felt like the brain needed some oxygen. So lunch run under hot sun it became. Took the route of the race I will not run on Saturday (to preserve my heel), which turned into a nice paced 10K. Sweaty but happy, had plenty of energy to continue the day!

This entry was posted on August 23, 2013 by kari_ontherun. It was filed under Running, Training and was tagged with easy, happy, pain, Rest, Running, sun, training, warm.

When it’s pouring down and you’re running through the rain, there’s satisfaction in knowing you’re out there and the others aren’t! - Peter Snell

The marathon is an art; the marathoner is an artist. - Kiyoshi Nakamura

Sunshine is delicious, Rain is refreshing, Wind braces us up, Snow is exhilarating; There is really no such thing as bad weather, Only different kinds of good weather.

Pearls of lunacy about running wild and free

“Why, sometimes I've imagined as many as six impossible things before breakfast.”

The world must know you.

A blog about running....and finding time to run on the road

My love hate struggle with running

It's about light, composition and running